Grandmaster Doug Cook holds an 8th Dan Black Belt from Chang Moo Kwan in the Korean martial art of taekwondo and is certified by the Kukkiwon as a 7th Dan. He is president/CEO of the United States Taekwondo Association, an Advisory Council member of the World Martial Arts Alliance, publisher of HOONLYUN: The Journal of the USTA, and a six-time gold medalist. He was a senior student of the late Grandmaster Richard Chun, 9th dan, for twenty-five years. Grandmaster Cook has trained in Korea on eight separate occasions and currently administers training and cultural tours to the homeland of taekwondo. He holds a D3 status as a US Referee and has received high honors from Korea in the form of a “Letter of Appreciation” signed by World Taekwondo Federation past-president, Dr. Un Yong Kim.

Grandmaster Cook is credited with the creation of the Chosun Women’s Self-Defense Course. He has also provided training for the US Army National Guard/42nd Division prior to military operations and has instructed agents from the Department of Homeland Security, the New York Police Department and the Bronx County Sheriff’s Department. Grandmaster Cook was called upon to demonstrate taekwondo as part of a three-man team at the annual Oriental World of Self-Defense held in New York City’s famed Madison Square Garden. There, he and the team were cheered on by martial arts legends such as Richard Chun, Henry Cho and Chuck Norris.

Because he is a traditionalist, Grandmaster Cook places great emphasis on the underlying philosophical principles and self-defense strategies surrounding taekwondo. He demonstrates this belief by infusing meditation, Kiexercises, a strong attention to basics, and the practice of the classical forms, or poomsae, in his instructional methodology.

Aside from continuing his martial arts education under senior grandmasters, Grandmaster Cook owns and operates the Chosun Taekwondo Academy located in Warwick, New York – an institute specializing in traditional martial arts instruction and Ki, or internal energy, development. Grandmaster Doug Cook currently shares his knowledge of taekwondo through a series of articles he has written for TaeKwonDo Times, Black Belt and Totally TaeKwonDo, as well as various other martial arts publications. For the past twenty-five years he has written monthly columns for TaeKwonDo Timesand Totally TaeKwonDomagazines. Grandmaster Cook is the author of four best-selling books focusing on taekwondo entitled, Taekwondo: Ancient Wisdom for the Modern Warrior, Traditional Taekwondo – Core Techniques, History, and Philosophy, a finalist in ForeWordmagazine’s Book of the Year Award, Taekwondo – A Path to Excellence, released in 2009, a USA Book Award finalist, and Taekwondo Black Belt Poomsae: Original Koryo & Koryo, authored in partnership with Grandmaster Richard Chun. All editions are published by YMAA of Boston and are available online and at booksellers worldwide.

Grandmaster Cook can be reached at info@chosuntkd.com or at www.chosuntkd.comand is available for ONLINE TRAINING, seminars, workshops, book signings, training tours to Korea, and lectures. 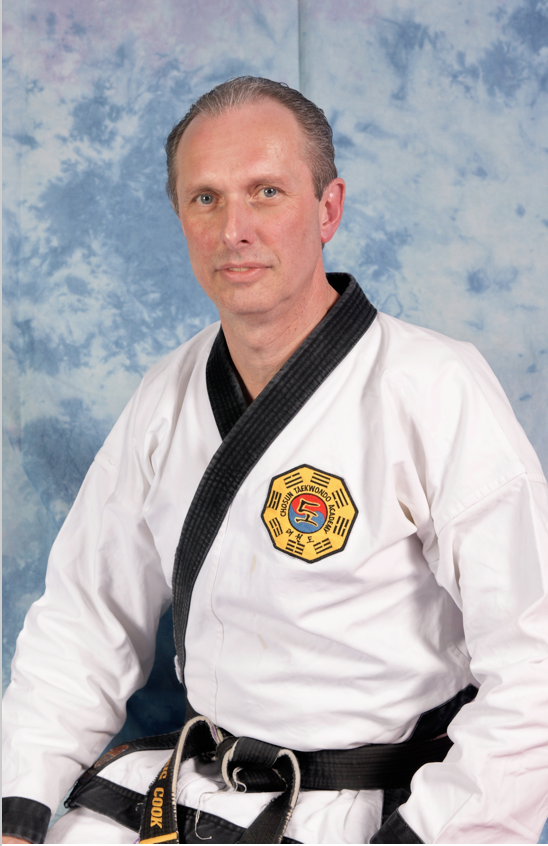